DomůCREST OF DARKNESS - The God of Flesh

CREST OF DARKNESS - The God of Flesh 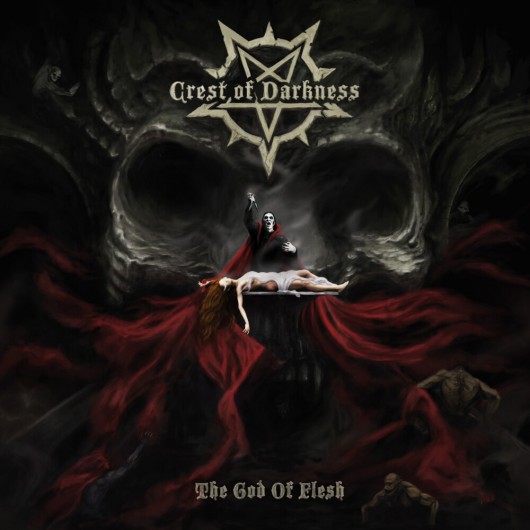 “This is probably the darkest and most brutal album we’ve ever made! It’s also the most honest work ever from my perspective”.
So says CREST OF DARKNESS founder Ingar Amlien about “The God of Flesh”, the ninth full-length album from the Norwegian Black Metal veterans.

Set for release on the 25th October on My Kingdom Music, “The God of Flesh” promises nine tracks filled with CREST OF DARKNESS’ trademark Satanic themes. But this time the band has expanded the feel , variety and depth of their music, showing them to be as much at home with more progressive and melodic elements, as they are the with the aggressive and dark, brutal side, for which they are known.

Recorded and mixed at the MLP Studio and Engineered by Nils H. Mæhlum, with guitars being recorded at Attic 43 and engineered by Rebo, “The God of Flesh” was produced by Crest of Darkness and mastered at the Kvålsonic Lab by Tom Kvålsvoll.
With all lyrics by Amlien and music by Amlien, Rebo and Bernhard, except for the track “Forgotten” where Amlien joins forces with the album’s session keyboardist Kristian Wentzel, and with cover art by Marius Engli Andersson, track listing for “The God of Flesh” is as follows:
1. The God Of Flesh
2. The Child With No Head
3. Endless Night
4. The Spawn Of Seth
5. Forgotten
6. Euthanasia
7. Blood
8. Godless Evil Eyes
9. Salvation In Hell