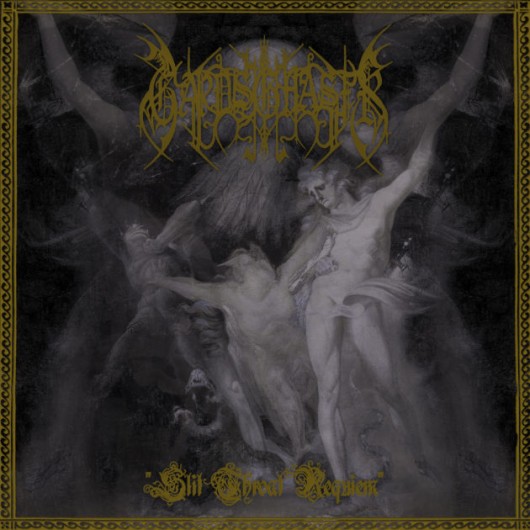 And the great mother, menstruate nevermore..."

Manifesting in a grandiloquent yet strident and powerful sound with a production that mirrors and ensnares the textures that were once produced from the confines of Greighallen Studios back in the ancient times, “Slit Throat Requiem” is a relentless black metal bombardment that flourishes through an overbearing wall-of-sound awash on dark ominous unmerciful atmosphere.

The central theme behind “Slit Throat Requiem” through the eyes of vocalist Glömd sees this monument as an “Invocation of darkness, both in human and spiritual forms, that intertwines various dimensions. It summons the old ages and mysticism of centuries past, while acting as a harbinger for humanity's consequential end. The disdain of empty souls thus being conquered by adversarial revenge, on earth and beyond. Destruction exceeding comprehension coalesces with the forthcoming diabolical rule. The end times, Ragnarok, the Apocalypse; our despondent sermon of "Slit Through Requiem."

Heavily orchestral on all fronts, from the ambient sound-generating guitar assault, the pounding battery, glorious sounding keyboards, and the piercing vocal incantations spewed forth, “Slit Throat Requiem” emerges as a black metal attestation to the genre’s true spirit and manifesting flame. A testimony compulsory in today’s black metal landscape.