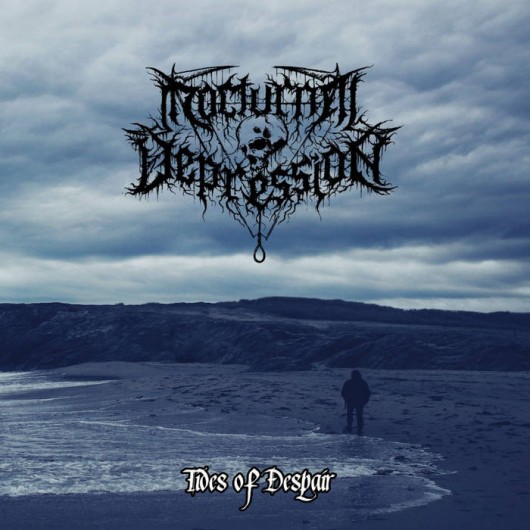 French masters of nostalgic, depressive black metal, NOCTURNAL DEPRESSION return with their latest opus, the ever-aptly-titled Tides of Despair. A special occasion to say the very least, 2019 sees the return of Herr Suizid, founding member of the band who left in 2012, rejoining with fellow founder Lord Lokhraed. As a result, Tides of Despair has all the elements which make NOCTURNAL DEPRESSION stand out from all the thousands of cliche DSBM pretenders, many of whom were inspired by the band's pioneering early works in the mid-2000s: immediately memorable riffs, achingly melodic leads, dramatic tension, and altogether dynamic songwriting.

Surprisingly, Tides of Despair begins in quite a positive manner - but deceptively so, as NOCTURNAL DEPRESSION soon embark on a gloomy, atmospheric journey, guiding the listener ownard into an exhaustingly emotional turmoil. Claustrophobic somberness comes to a climax on the perfectly titled "Living in a Mass Grave," forlorn acoustic moments abound, despair and depression suitably mark songs like "Solitude and Despair Again" and "Farewell Letter," epic gloom in "Muse of Suicide," and all concluding with the bleak and melancholic "Reveries." Throughout, the surprises continue with the integration of French horn, pianos, chimes, and bells, with a multitudeof guests from different bands (Psychonaut 4, Sarkrista, Tulpa, Darkend, Selvans) making the album even more refreshing.

Completed by mixing & mastering courtesy of Alessandro "Algol" Comerio from Forgotten Tomb/Hiems, NOCTURNAL DEPRESSION prove with Tides of Despair that both the past is alive and the future is bleak!