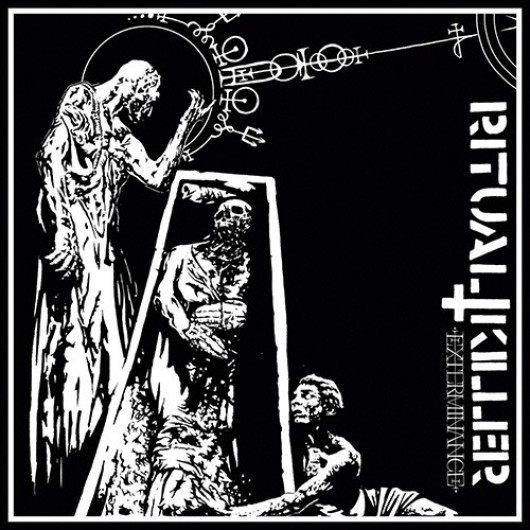 US black metal has become largely associated either with Norwegian influenced post-core offspring such as AGALLOCH and WOLVES IN THE TRHONE ROOM or genre expanding avant-gardists like NACHTMYSTIUM and DEAFHAVEN on this side of the Atlantic. Yet America can play dirty too. RITUAL KILLER unleash infernal violence with their unyielding sophomore album 'Exterminance'. Steeped in the tradition of US extreme metal pioneers POSSESSION, guitars grind out the sound of chainsaws cutting down crosses, while Jordan Barlow vomits forth the sickest black-bile vocals. There are reasons to believe that the New Orleans background of RITUAL KILLER with its burgeoning gritty sludge scene might have influenced the monstrous sound of this band that seems to have been forged in the furnaces of hell. There in the mysterious, dark and brooding atmosphere of Louisiana former and still active members of GOATWHORE gathered with fellow cultists to bring RITUAL KILLER onto this plane of existence in the year 1999. HELLHAMMER as well as CELTIC FROST, DARKTHRONE, BATHORY, SARCOFAGO, and BEHERIT can be identified as early influences. A first full-length, 'Upon The Threshold Of Hell' was unleashed in 2005 and gained the band a reputation as one of America's most brutal and uncompromising extreme metal acts. Now RITUAL KILLER are ready to spread the evil of their fiery eight new tracks across the globe. Set the world on fire!