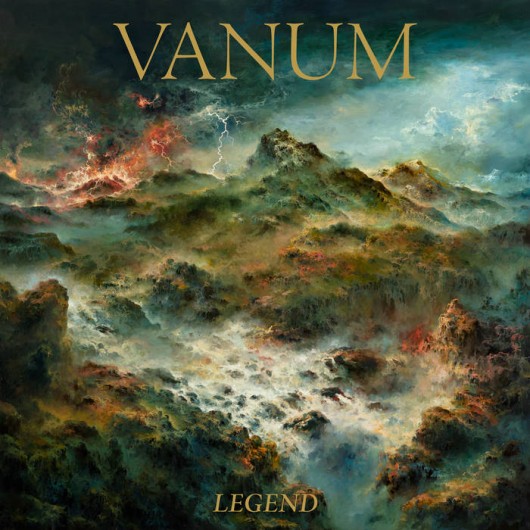 After a period of smoldering dormancy Vanum reappears, blazing and alive, with their third full length album, Legend. Continuing the triumphant march of previous works, but raising the stakes even higher, Legend finds Vanum both expanding and refining their approach, and in turn delivering their most fully realized recording to date.

The core of the band's sound remains unchanged: unyielding and grandiose Black Metal that traces a hellish through line from the power of mid-era Bathory, through the riff-craft of the Hellenic masters, to the bitter fury of the Slavic greats. But amidst the pantheon of familiar influences new touchstones become ever more apparent. With Legend, the continuum is charted further back and to new lands. Within the throes of the Black Metal maelstrom, echoes of classic heavy metal are increasingly recognizable, further bolstering Vanum‘s towering melodic sensibility and epic songwriting. Coupled with a deeper and expanded exploration and use of ambience and synthesizer, the album is imbued with a richness and sense of majesty that underpins each of its five towering compositions.

Due to the global chaos of 2020/21, initial recording plans had to be scrapped in favor of extremely detailed demo and pre-production work, followed by a remote tracking process. As the album was recorded in various locations throughout the country, producer Andrew Oswald was enlisted to oversee technical and performance nuance from afar before handling the mixing duties in which he meticulously sculpted the thunderous, full sound of the album. Adorned with an original painting by Petri Ala-Maunus, the entire package from concept through composition, execution, and presentation is one unified by a sense of strength, power, and romantic awe.

While musically dynamic as ever, the overriding theme of the album is one of victory. Victory amidst bloodshed; triumph amidst loss. This is Black Metal as spiritual war, the aural embodiment of ancient combat and heroic struggle. This is Legend.