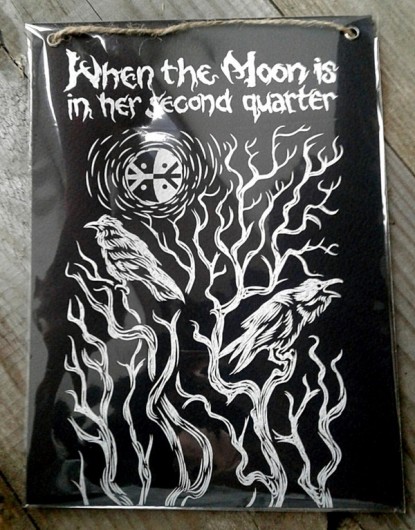 The lunar tree stretches its branches, as if they were the tentacles of a monster, and pulls, clings, embraces
the lost souls. Soon, paths and glades slowly covers with mosses and herbs. Forest spirits groan between the tumbled-down tree tranks, giving birth to the horrifying music, when the Moon is in her second quarter...
label Status Prod. presents the self-titled debut CD album of the anonymous ritual ambient / death industrial project When the Moon is in its second quarter.
Two nameless hymns - rituals narrate the chthonic nature of the forest, which resists any manifestation of the human presence. Whimsical drawings of rhythms and drones call into the darkest, forbidden forest thickets and make the souls get lost in them forever ...
The album was released in 200 hand-numbered copies, and is a pennant made of black designer cardboard with PAINT-IT-BLACK DESIGN, applied by silk-screen printing on it, in silver color.
For connoisseurs of old-school ritual industrial in the spirit of Korpses Katatonik and Trepaneringsritualen, as well as Phurpa and Vril Jäger.