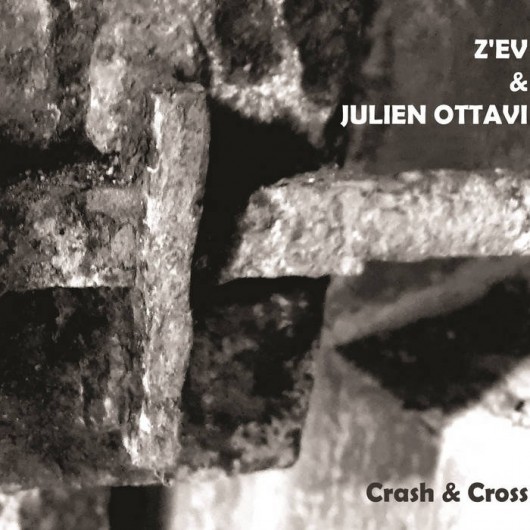 In 2009 at Area10 in London, our mutual friend Kasper T. Toeplitz introduced Z’EV (1951 - 2017) with his percussion to me (Julien Ottavi) during a David Tudor’s Rainforest IV performance that I was organising at that time with the support of Apo33.
Even though we had played a couple of gigs before in London and Nantes, the real start of our collaboration was when we toured together in 2011. In 2014, Z’EV came to live in Nantes and we spent time playing music together, mainly working with Orgone Nantes Percussion on a Z’EV piece for percussion. We worked on some recordings mixed live and studio sessions that had been put together over the year after 2015. We used both percussion recordings and live music that were sometimes processed and other times not. We spent a whole year recording bits and pieces that were assembled together during a few months. The idea was to create a release that will cross the different aspects of our collaboration, together, live, recorded, in the same place, sometimes in different places. The aspects of composition were really strong as we worked on each other's materials through exchanges about the way to mix it and arrangement of the multi-track recordings. Some parts of the live materials were recorded as stereo, and the most interesting parts were cut and assembled. Even today, it is difficult to say which one is live and which one is not. But does it really matter?