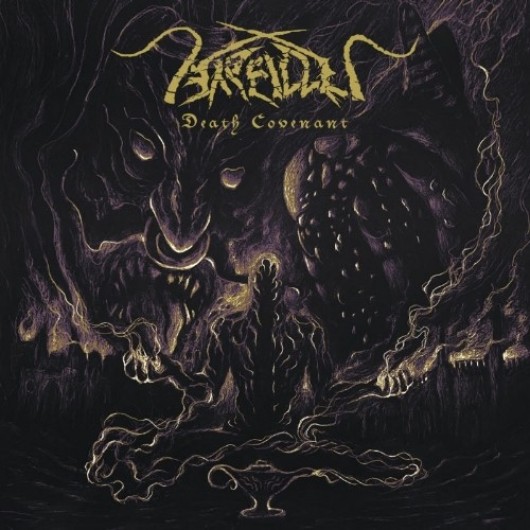 Unholy Black Metal from the Holy Land, drenched in Middle-Eastern tones and mystique! An invocation of thousands of years of Darkness!

Hailing from the urban Israeli settlement called Ma’ale Adummim in Israel, Arallu is a five-piece Black/Death Metal act that has been around the metal underground for twenty-five years.

The band got the name Arallu from the Mesopotamian mythology, as it is the name of the underworld kingdom ruled by the goddess Ereshkigal and the god Nergal, where the dead are judged. Arallu’s music revolves around the traditional ancient Middle Eastern melodies of fellow countrymen Melechesh, the high speed savagery of bands like Angelcorpse and Absu, and the atmospheric feel of legendary acts like before mentioned Melechesh and Absu.

In 2019 the band had released the record called “En Olam”, and that opus has solidified Arralu’s already known talent to the underground extreme metal community. “Death Covenant” is the band’s seventh full-length studio offering and the album offers the listeners a very stunning infusion of occult Black Metal music with the ancient Sumerian and Middle Eastern sound.

The riffs found in here will satisfy the listeners with its frenzy of melodic tremolo picked riffs that is intertwined with some eerie folk instrumentation. The elements in the guitar department, thrown in with a few folk instruments such as a saz and a darbuka, reveals how the band had successfully stripped metal down to its core and added a personal touch of their own special flair. them and it provides that extra punch and low-end heaviness to the overall outcome of Arallu’s music. It basically lies steadily beneath the guitars as it backs them up with some thick lines that give a more deep feel to the strings and dispenses an ominous atmosphere to the tracks.

The drum section also catches the audience’s attention with a variety of destructive pummeling double bass blasting to some Middle Eastern tribal drumming that helps a lot in terms of keeping the atmosphere intact. The record is filled with high-pitched piercing shrieks and screams which create a dark and raw soundscape.

These vicious shrieks are sometimes jacked up with some uncanny backing vocals that tie together the brutality of extreme death and Black Metal music to the ancient Middle Eastern scales of the material. “Death Covenant” also parades the band’s strongest production to date in their twenty-five years of existence.

Arallu had created a menacing and atmospheric beast in this style of metal with their release of “Death Covenant”. These Israelis had put out a savage album that is hardly comparable to its predecessors.